In 1876, Philadelphia hosted the Centennial Exhibition which was the official world fair held on US soil to commemorate the one-hundredth anniversary of the nation’s birth. The exhibition was a huge opportunity to show off one’s work as thousands of visitors would come. Knowing this, Edmonia Lewis tentatively submitted her sculpture called “The Death of Cleopatra,” which went on to become one of her most known works. Edmonia is considered the first professional African-American sculptor. She received international and national prominence for her work that focused on stories that weren’t explored during this period.

Lewis’s early life has a lot of contrasting testimonies. However, it is believed that she was born either in Ohio or New York in 1845. Her father was African-American, and her mother was a Chippewa Native American. Tragically, she was orphaned by the time she was five and was raised by her mother’s tribe for some time. Her early education was financed by her brother, who had moved to California to become a gold miner. When she was younger she went to school in Albany, and later attended Oberlin College in Ohio in 1859. While at college she dropped her Chippewa name Wildfire, to take the name, Mary Edmonia Lewis. Her time at Oberlin College was fraught with difficulty. In 1862, she was accused of poisoning two of her white classmates when they became sick after drinking the mulled wine she had served. Lewis was severely beaten by local vigilantes, arrested, but ultimately acquitted. A year later, she was accused of stealing art supplies but later acquitted. Lewis eventually left Oberlin in 1863.

After leaving Oberlin, she moved to Boston. At the time, Lewis did not have much training, experience, or exposure, but, she was determined to become a sculptor. To do this she needed to raise funds, and the way she did so was by producing medallion portraits of well-known abolitionists such as Wendell Phillips, Charles Summer, and William Lloyd Garrison. During her time in Boston, Lewis met portrait sculptor Edward Brackett, with whom she would begin her limited sculptural studies. Her portrait bust of Colonel Robert Goud was very popular, and she was able to make enough money to move to Rome in 1866. At the time of her move she had not given a reason fueling her decision. In an Interview with the New York Times in 1878 she said, “I was practically driven to Rome in order to obtain the opportunities for art culture, and to find a social atmosphere where I was not constantly reminded of my color. The land of liberty had no room for a colored sculptor.”

While in Rome, Lewis rented a studio near the Piazza Barberini where she explored more of her style. Lewis settled in quickly, learning Italian and becoming acquainted with famous Americans living in Rome such as the sculptor Harriet Hosmer, and actress Charlotte Cushman. Rome was a huge attraction for American sculptors because of the availability of fine white marble, and stone carvers who were experts at transferring plaster models into finished marbles. Many sculptors favored using stone carvers to transfer their plaster models into the finished marble, but Lewis stood out because she rarely used stone carvers and finished most of her work by herself. This could be for various reasons, one of which was that male sculptors often doubted the skill of female sculptors, which with Lewis was more profound because she wanted to defend her skills not only as a woman but as a Black & Native sculptor.

Lewis favored neoclassical style as it was the popular style in Rome when she moved there. Her work was inspired by her own identity, religion, and mythological subjects. Her sculpture ‘Forever Free’ was created soon after moving to Rome. The sculpture depicts the moment that an African American couple first heard the news of the Emancipation Proclamation. Henry Wadsworth Longfellow’s poetry inspired a lot of Lewis’s work. ‘The Wooing of Hiawatha’, ‘The Departure of Hiawatha, and Minnehaha’, and ‘The Marriage of Hiawatha’ were inspired by his poem, ‘The Song of Hiawatha’. Lewis and Longfellow were able to meet in 1869 when Longfellow visited Rome and sat for a portrait.

One of her most critically acclaimed pieces is Hagar. The sculpture is a depiction of Hagar from the Old Testament. Hagar was Egyptian, and the maidservant of Sarah, Abraham’s wife, who bore Abraham’s first son Ishmael. Hagar was cast into the wilderness after the birth of Sarah’s son Isaac. Art historian Kirsten Buick argues that, “while Lewis’ women are executed in white marble with European features, they nonetheless represent the artist’s determination to broaden the typical range of female subjects in art and the ideals of true womanhood, to include those of non-European origin”.

Not much is known about Lewis after she moved to Rome. It is known that she was in the United States to attend an exhibition of her works in 1872, and again in 1876 to attend the Centennial Exhibition in 1876. She never married or had children. Lewis is reported to have died in London in 1907.

Much of Lewis’s work is held in major collections in the Howard University Gallery of Art, Detroit Institute of Arts, the Metropolitan Museum of Art in New York, the Baltimore Museum of Art, and the Smithsonian. Her work was lost for a long time, but now her work is being given the recognition that it deserves. 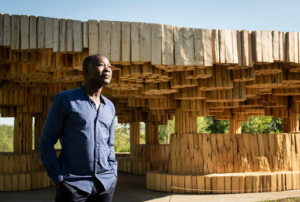